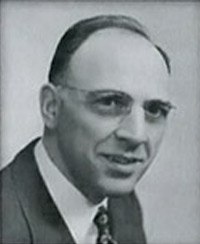 Richard Dehmel, Ph.D. (1904-1992) Curtiss-Wright Corp., Caldwell, inventor of the Dehmel Flight Trainer/Simulator, was granted U.S. patent No. 2,494,508 for “Means for Aircraft Flight Training” on Jan. 10, 1950. The invention was the first to solve the equations of flight and have the controls and instruments of the trainer respond as an accurate equivalent of a real airplane. Dehmel spent much time building a multi-talented team to accelerate the design and production of this critical tool for use during the latter half of World War II.

The Rise of Electrical Flight Trainers

Two of the first electrical flight trainers, both still based on empirical designs, were Dehmel’s trainer and Travis’ “Aerostructor”. Dr. R.C. Dehmel, an engineer with the Bell Telephone Laboratories, became interested in flight training in 1938. His first development was an automatic signal controller for the generation of synthetic radio signals for a Link Trainer, thus eliminating the need for the attendant who manually operated signal volume controls during the training session. This was an important advance in instrument flight training in that it enabled a closer match with the behavior of actual navigational aids. Following this, Dehmel developed the “flight” portion of a trainer based on electrical circuits. This machine was never manufactured, but served as a starting point for future developments. The Aerostructor, developed by A.E. Travis and his colleagues in 1939/ 40 also in the United States, was a fixed base, electrically operated trainer with a visual rather than an instrument presentation. The visual system was based on a loop of film and simulated the effects of heading, pitch and roll movement. The trainer was widely demonstrated in the U.S., but was never commercially produced. It was however, used in large numbers by the U.S. Navy in a modified form as the “Gunairstructor”.

Since the development of his electrical instrument flight trainer Dr. Dehmel had gained experience in analogue computing techniques through his work on Bell’s M-9 anti-aircraft gun directors. He applied this knowledge to the design of an instrument flight simulator based on an analogue computer. He was then able to interest the Curtiss Wright Corporation in the manufacture of these devices in 1943. After the development of a prototype trainer, the U.S. Air Force ordered two trainers from Curtiss Wright for the AT-6 aeroplane; this trainer was named the Z-1 and is shown in the photo. These were followed by production examples designated the Z-2, -3 and -4.

The trainer/simulator dramatically reduced the cost, time and risk to train aircraft crews. It also allowed a significantly higher level of training in “extraordinary situations.” For example, Pan American World Airways trained 125 flight crews, plus 46 British Overseas Airways and 85 military transport crews during 13,000 hours of simulator time. The simulator enabled Pan Am to reduce crew training costs by 60 percent and in-flight training time from 21 to eight hours per crew.

Dehmel earned master’s and doctorate degrees from Columbia University after earning a mechanical engineering degree from the University of California. He was a 1991 inductee into the Aviation Hall of Fame of New Jersey.

These flight simulator patent drawings were made by Richard Dehmel in 1941. The patent was granted in 1950. 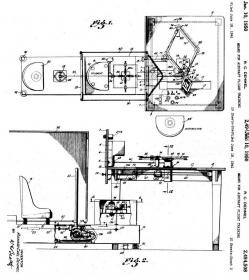 The Army Air Corp ordered three trainers from Curtiss Wright for the AT-6 (which by the way is the first plane I actually controlled). These were designed by Dr. Richard Dehmel in 1941 although his patent No. 2,494,508 for “Means for Aircraft Flight Training” was not granted until 1950. The invention was the first to solve the equations of flight and have the controls and instruments of the trainer respond as an accurate equivalent of a real airplane. Dehmel was the holder of some 43 patents – mostly to do with flight simulators and electrical devices.

Curtis-Wright went on after World War II to make simulators for the Boeing 377 Stratocruiser used by Pan American Airways and BOAC and the equivalent military C-97. The computation was still analog, using electric signals and servo motors, potentiometers, and servomotors to drive the instruments. These simulators were used to instruct over 250 airline and military crews saving 60 percent of the training costs and reducing the in-flight time to only eight hours.

The Curtiss-Wright electronic trainer was designed by Richard Dehmel and donated to the The Aviation Hall of Fame & Museum of New Jersey.

In 1943, Richard C. Dehmel licensed Curtiss -Wright Corp. to produce flight training devices under his patents. The simulators were the first of their kind, and after five years of research they went into production. By 1951, an electronics division was formed and a modern plant for producing the simulators for military and civilian use was opened in Carlstadt, NJ. The plant also produced engine and propeller controls, guided missiles and related devices.

In the first full year of operation, the value of the Electronics Flight Simulator was proven during 13,000 hours of simulator time in which Pan American World Airways trained 125 crews plus 85 Military Air Transport crews. Use of the simulator enabled Pan Am to reduce crew training costs by 60% and cut in-flight training time from 21 to 8 hours per crew. Our example was used by Eastern Air Lines.