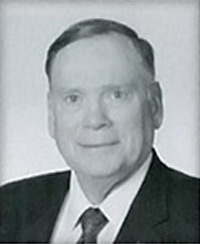 In recognition of service to the nation as Chief of Staff of the United States Air Force, serving as an advocate and outspoken supporter for the use of modeling and simulation in the development of Distributed Mission Training (DMT) and Distributed Mission Operations (DMO).  A true visionary, General Jumper’s championing of DMT and DMO ensured that aircrews and ground forces would have the most realistic and challenging scenarios available to prepare them for complex missions.

John P. Jumper was born in Paris, Texas. He earned his commission as a distinguished graduate of Virginia Military Institute’s (VMI) Air Force ROTC program in 1966. He has commanded a fighter squadron, two fighter wings, a numbered Air Force, and U.S. Air Forces in Europe and Allied Air Forces Central Europe. Prior to becoming Chief of Staff of the Air Force, the general served as Commander of Air Combat Command at Langley Air Force Base.

Jumper has also served at the Pentagon as Deputy Chief of Staff for Air and Space Operations, as the Senior Military Assistant to two secretaries of defense, and as Special Assistant to the Chief of Staff for Roles and Missions. A command pilot with more than 5,000 flying hours, principally in fighter aircraft, Jumper served two tours in Southeast Asia, accumulating more than 1,400 combat hours.

Jumper retired from the Air Force on November 1, 2005.

General John P. Jumper was Chief of Staff of the U.S. Air Force, Washington, D.C. As Chief, he served as the senior uniformed Air Force officer responsible for the organization, training and equipage of more than 700,000 active-duty, Guard, Reserve and civilian forces serving in the United States and overseas. As a member of the Joint Chiefs of Staff, the general and other service chiefs function as military advisers to the Secretary of Defense, National Security Council and the President.

He has also served at the Pentagon as Deputy Chief of Staff for Air and Space Operations, as the Senior Military Assistant to two secretaries of defense, and as Special Assistant to the Chief of Staff for Roles and Missions. General Jumper has been involved in numerous major combat and contingency operations since he entered service in 1966. He served two tours of duty in Southeast Asia. He was the commander of U.S. Central Command Air Forces during operations Northern and Southern Watch, and the commander of U.S. Air Forces in Europe during Operation Allied Force. His tour as Chief of Staff has spanned operations Enduring Freedom and Iraqi Freedom. He was a command pilot with more than 5,000 flying hours, including 1,400 combat hours.

John P. Jumper earned a Bachelor of Science degree in electrical engineering from VMI in 1966. Following a distinguished 39-year career, he retired in 2005 as the 17th Chief of Staff of the United States Air Force. In his four years as the senior uniformed official in America’s air and space service, General Jumper led more than 700,000 men and women through the Global War of Terrorism, force modernization, and strategic transformation. Among his many assignments were commander of Air Combat Command at Langley Air Force Base, Virginia, commander of U.S. Air Forces Europe and Allied Air Forces Central Europe, and senior military assistant to the Secretary of Defense. Working with his civilian and military colleagues, he administered annual budgets of more than $100 billion and oversaw the delivery of numerous air and space combat support systems. He was a fighter pilot, commanded an F-16 fighter squadron, commanded two fighter wings, and accumulated 5,000 flying hours including more than 1,400 combat hours in Vietnam and Iraq. He earned a master of business administration degree from Golden Gate University.

General Jumper was selected to the Board of Trustees of the VMI Foundation, Inc. in 2008, has served as the Air Force Commissioning Officer during several VMI commencements, and has spoken on numerous occasions at VMI to include being the keynote speaker at the Institute Society Dinner in 2001.

On February 21, 2012, it was announced Jumper would take on the role of CEO of Science Applications International Corporation (SAIC) starting March 1, 2012. Jumper joined SAIC’s Board of Directors in June 2007. He also serves on the Board of Directors of the Goodrich Corporation, NACCO Industries, Inc., WESCO Aircraft Hardware Corporation and Rolls-Royce North America Holdings, Inc. General Jumper’s service on the non-profit boards includes the Air Force Village Charitable Foundation and the Aerospace Industrial Association. He is a member of the Council on Foreign Relations and was appointed by the Governor of Virginia to the Governor’s Commission on Military and National Security Facilities.

The annual Gen. John P. Jumper Award is based on the integration of Air Force warfighting or operations support capabilities that shorten the kill chain or enhance the decision cycle.

General Jumper and his wife Ellen live in Spotsylvania, Virginia and have three grown daughters who have served in the Air Force, one still on active duty.