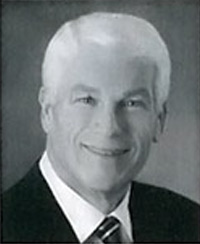 In recognition of his leadership in advancing academic excellence in Modeling, Simulation and Training (MS&T). As President of the University of Central Florida, he created an environment of partnerships, discovery and research while leading the nation in offering advanced degrees in MS&T. Through Doctor Hitt’s vision and initiatives, the body of knowledge of modeling and simulation was expanded to support industry and government initiatives across a wide spectrum of applications.

John C. Hitt (born 1940) is an American professor and academic administrator, serving as the fourth and current president of the University of Central Florida in Orlando,Florida since 1992. Hitt was named the Orlando Sentinel’s Central Floridian of the Year in 2005, and has twice been ranked as Orlando’s most powerful person by Orlando Magazine. Hitt is currently the dean of Florida’s university presidents, serving as the longest tenured president in the state.

Raised in Houston, Texas, Hitt graduated from Austin College in Sherman, Texas in 1961 with a Bachelor of Science degree in psychology. He continued his education atTulane University, where he completed both his Master of Science and his Ph.D. by 1966. He would stay at Tulane, where his career as an assistant professor began. In 1969, Hitt moved to Texas Christian University, working as an associate professor of psychology. Three years later, he became associate dean of the university, and in 1974, he became vice president of the school’s Research Foundation and soon after dean of the graduate school.

Hitt was selected by the Florida Board of Regents to succeed Robert A. Bryan as UCF’s president. Bryan had been serving in an interim capacity since June 1991 when Steven Altman stepped down as the university’s third president.

Upon taking office in Spring 1992, UCF’s enrollment was 20,302, and as of 2012 enrollment consists of 58,698 students representing over 140 countries, all 50 states and the District of Columbia. Under the direction of Hitt, UCF has raised admissions standards, increased research funding, built new facilities, and established notable partnerships with major research institutions.

Hitt’s efforts have resulted in not only an increase in the university’s academic profile, but also more than $1 billion in new construction, including Bright House Networks Stadium, the CFE Arena, and new on-campus housing. Hitt was instrumental in the development of the UCF College of Medicine at Lake Nona, and the formation of theBurnett Honors College, and the College of Graduate Studies. Under his leadership UCF has become a “very high research activity” university as ranked by The Carnegie Foundation for the Advancement of Teaching.

In 2012, the main campus library was renamed in honor of Hitt, UCF’s 50th anniversary, followed another key milestone: the 20th anniversary of John C. Hitt as president of UCF. Hitt became the university’s fourth president on March 1, 1992, and two decades of remarkable results have followed under his visionary leadership.
During his tenure, enrollment has nearly tripled to almost 60,000 students, and UCF has greatly expanded access to higher education. Typically, UCF sets new school records each year for the quality of its students, the number of transfer students it accepts from community and state colleges, and the number of degrees it awards.

U.S. News & World Report recently rated UCF as the nation’s No. 5 “up and coming” university, and the Carnegie Foundation designates UCF with its highest ranking as “a very high research activity” institution. Meanwhile, President Hitt’s drive to establish UCF as America’s leading partnership university has made UCF synonymous with the progress and prosperity of Central Florida and the Sunshine State.
For instance, the president’s persistence in working with state, local, and federal government officials and private businesses led to construction of the UCF College of Medicine at Lake Nona. A cluster of related facilities has resulted in a medical city that is the biggest economic boost for Central Florida since Disney World. By the end of 2017, this collaborative effort is projected to generate 30,000 jobs and an annual $7.6 billion economic benefit for the region.

UCF’s rise as a leading major metropolitan research university has brought international distinction to the university and more high-tech jobs to the region. Since President Hitt’s arrival at UCF, research funding has escalated from $28.4 million to more than $100 million annually for the last nine years. UCF professors conduct research of global impact on such diseases as diabetes and cancer, and professors and students from various fields work with companies throughout Central Florida. Together, they develop new technologies and innovations that create high-paying jobs as part of the Florida High-Tech Corridor Council.

President Hitt founded the 23-county corridor council in 1996 with University of South Florida President Betty Castor. The University of Florida has since joined on, anchoring a public-private approach that has generated more than 3,200 jobs with a direct and indirect economic benefit of $1.3 billion. And UCF’s national reputation for innovation continues to grow in such areas as optics and lasers, simulation and training, video game production, and hospitality management.

During Dr. Hitt’s presidency, UCF has launched more than $1 billion in new construction. The projects include a new stadium, arena, student union center, regional campuses, student wellness center, a visitor information center, and community health clinic. Of the more than 247,000 degrees earned by students during UCF’s history, President Hitt has awarded 78 percent of them.
The president’s unique approach to tackling opportunities, challenges, and problems has taken UCF from promise to prominence – and it has earned him many accolades. Those include being twice ranked No. 1 on Orlando Magazine’s list of Orlando’s 50 Most Powerful People and earning the Orlando Sentinel’s Central Floridian of the Year award.

Prior to arriving at UCF, Dr. Hitt served as the interim president at the University of Maine. His leadership experience also includes a decade as provost and vice president for academic affairs at Bradley University in Illinois. He and his wife, Martha, whom he met at Austin College in Texas where they both attended, celebrated their 50th wedding anniversary in 2011. They have two children and two grandchildren.

A Leader in Higher Education