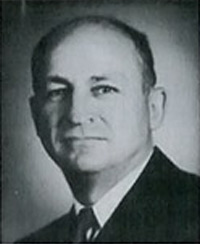 In recognition of the major inventions and contributions made to military and commercial aviation training employing synthetic training devices. Ed Link’s “Link Trainer” was the force-multiplier in World War II and the beginning of the multi-billion dollar flight simulation industry. A pioneer in simulation technology, he was awarded numerous patents in aeronautics, navigation and oceanographic equipment.

Edwin Albert Link (July 26, 1904 – September 7, 1981) was a pioneer in aviation,underwater archaeology, and submersibles. He is most remembered for inventing the flight simulator, commercialized in 1929, called the “Blue Box” or “Link Trainer”, which started the now multi-billion dollar flight simulation industry. Prior to his death in 1981, he had accumulated more than 27 patents foraeronautics, navigation and oceanographic equipment.

He took his first flying lesson in 1920. In 1927, he obtained the first Cessnaairplane ever delivered and eked out a living by barnstorming, charter flying and giving lessons. 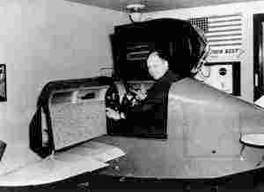 As a young man, Edwin Link used apparatus from his father’s automatic piano and organ factory (of the Link Piano and Organ Company) to produce an advertising plane. A punched roll and pneumatic system from a player pianocontrolled sequential lights on the lower surfaces of the wings to spell out messages like “ENDICOTT-JOHNSON SHOES”. To attract more attention, he added a set of small but loud organ pipes, also controlled by the roll.

In the 1920s, he developed the Link Trainer, “a fuselage-like device with a cockpit and controls that produced the motions and sensations of flying.” Much of the pneumatic system was adapted directly from technology used in the organ factory (in the 1970s Link used parts scavenged from an inoperative trainer to help rebuild a Link pipe organ). He formed the Link Aeronautical Corporation in 1929 to manufacture the traine
rs. His few early customers were amusement parks, not flight training schools; the early models served as amusement rides. Finally, in 1934, the United States Army Air Corps bought six. During World War II, more than half a million airmen were taught by the Link Trainer. 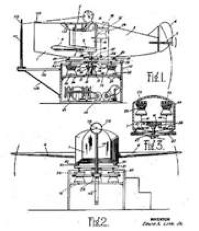 Together with his wife Marion Clayton Link, whom he had married in 1931, Edwin Link managed the very successful Link Aviation, Inc. He contributed a great deal to the Binghamton, New York area, where he set up a production facility that at one time employed thousands of workers. The field on whichGreater Binghamton Airport lies is named after him, and there is an original “Blue Box” on display in the terminal.

Link was awarded the Howard N. Potts Medal in 1945 for developing training devices for aviators. In 1953, Edwin and Marion Link established The Link Foundation. The foundation continues to provide grants and fellowships inaeronautics, simulation and training, ocean engi
neering, energy, and organizations of interest to the Links. Ed Link received an honorary degree from Binghamton University. In 1976, he was inducted into the National Aviation Hall of Fame.