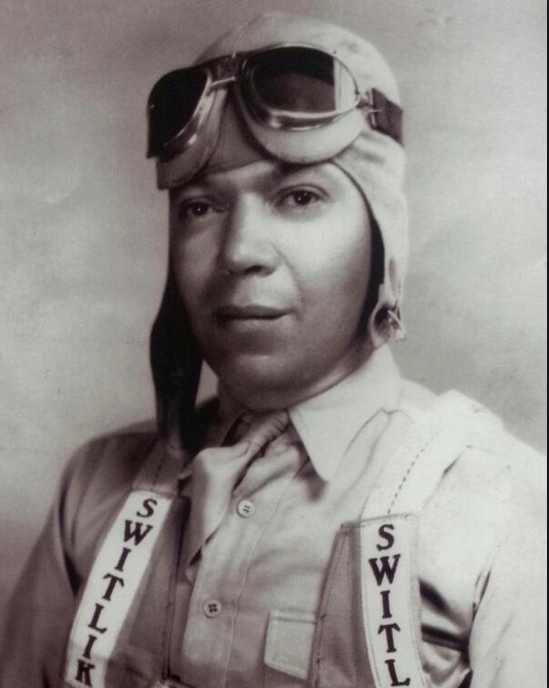 C. Alfred “Chief” Anderson was born February 9, 1907 to Janie and Iverson Anderson of Bryn Mawr, PA. Young Anderson was fascinated with planes at an early age and knew that one day he would fly them after he saw his first airplane about the age of 10. This was the only dream he ever had in life, was to become a pilot.

As the young Anderson grew into puberty he began saving his wages by working with his father in order to one day purchase an airplane of his own. In 1927 Anderson made his first downpayment on a Velie Monocoupe – a wooden framed, two-seater plane. But soon realized that his meger savings were not going to be enough to pay for the aircraft. So he asked for contributions from close friends and family to assist him with making the full purchase of the Velie Monocoupe. Within a short amount of time Anderson raised enough money to purchase the aircraft in 1927.

Now that young Anderson owned an airplane he needed flight instruction and thus began his journey into the world of racism and segregation, as a result of Jim Crow laws , seeking formal instruction. Anderson requested entry into the Norristown Sportsman Club at Patco Airport in Norristown, PA but was declined entry due to his race. But he had a plan “B”, he was able to get taught airplane mechanics but just not how to fly, so he learned as much about airplane mechanics as he could. With growing impatience and frustration of not being able to receive formal flight instruction, Anderson decided that he would teach himself how to fly using his knowledge of airplane mechanics.

Anderson located a field that he would taxi his Velie Monocoupe very slowly and over time began to move his airplane faster and faster. And one day he took aloft, but had no clue how to land. On his first landing he damaged his airplane and hurt himself very badly, but he did land and lived through it. So then he thought up a plan “C”, which was to visit different local airports under the guise of an airplane mechanic, in order to pick up knowledge in bits and pieces of flight instruction information from the pilot’s whom airplanes he would service. While working at the Norristown Sportsman Club Anderson struck up a friendship with another young pilot named Russell Thaw. Thaw had a pilots license but no airplane and Anderson had an airplane with no pilot’s license. The two men would make a barter, which was if Thaw could use Anderson’s airplane for free to visit his mother in Atlantic City, NJ, then Thaw would provide formal instruction to Anderson for free. The two men followed this routine from 1927 through 1929. This bartered relationship allowed Anderson to get enough formal flight training to earn his private pilots license in August 1929.

As ambitious as Anderson was he felt the need to go all the way and dreamed to earn an air transport pilots license, which no other black person had ever tried before, but Anderson was not deterred at all. Through his connections with the different flying clubs across Pennsylvania, Anderson was referred to German aviator Ernest H. Buehl “The Flying Dutchman” who had no racist ideologies and enjoyed the art of flight instructing to anyone that wanted to learn. Under Buehl’s tutlege, Charles Alfred Anderson later to be known as C. Alfred “Chief” Anderson AKA Chief Anderson became the first black person in American history to earn an air transport pilots license. He earned that license in February 1932 though the Civil Aeronautics Administration (CAA) known today as the Federal Aviation Administration (FAA). Little did Anderson know during those first very difficult years as a fledgling pilot, his actions would not only change the trajectory of his life forever but would also change the trajectory of the aviation world forever.