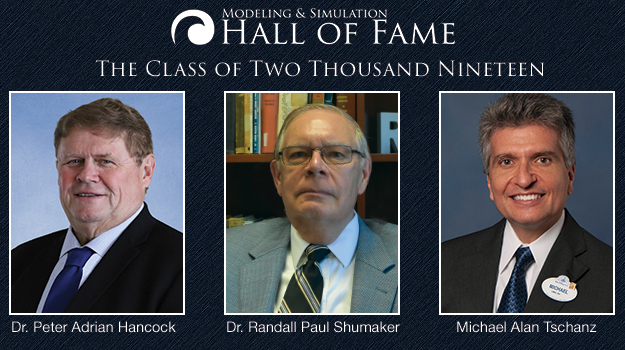 ORLANDO, Fla. –The National Center for Simulation (NCS) announces the selection of three prestigious individuals who will be inducted into the NCS Modeling and Simulation Hall of Fame at a formal ceremony this summer. University of Central Florida’s Dr. Peter Adrian Hancock, researcher and Professor Emeritus andDr.Randall Paul Shumaker, director of the UCF School of Modeling, Simulation and Training and the Institute for Simulation and Training; and Michael Alan Tschanz, Walt Disney World’s Director of Technology and Analysis.

“It has been our distinct pleasure since our inaugural class in 2014, to pay tribute to these passionate M&S pioneers each year, and their significant contributions in the MS&T industry,” said George Cheros, president and CEO for the National Center for Simulation. “This year all three 2019 honorees live and work in the Central Florida region, a region that enjoys a $6 billion impact from the modeling, simulation and training industry.  They, along with those recognized before them, have left a legacy in simulation for future generations – and this year’s honorees will continue to push the envelope every day.”

The Hall of Fame induction ceremony is scheduled for July 31 at the Orange County Convention Center, south concourse, where the NCS Modeling and Simulation Hall of Fame “wall” is on permanent display.

Dr. Peter Adrian Hancock is a UCF Provost Distinguished Research Professor, University Pegasus Professor and University Trustee Chair at the forefront of modeling and simulation since the late 1970s. His early work on modeling physiological systems influenced both national and international standards for Occupational Stress Exposure, and earned him honorary membership into the American Society for Heating, Radiation and Air-Conditioning Engineers. Other honorary members include former U.S. President Herbert Hoover and 2019 inductee, Bill Gates.

In a professional career that extends more than forty years, Hancock conducted multiple projects for all branches of the U.S. military. His work for the U.S. Air Force on dynamic function allocation helped influence the founding of the Augmented Cognitive Society, earning him recognition as the Admiral Leland Kollmorgan Award winner for his pioneering efforts. He was also the first to link together two, full-vehicle based ground simulation facilities for testing and pioneering computer-based, information exchange protocols to allow for real time interaction.

In addition, Hancock directed and oversaw the graduation of the first successful Ph.D. candidate at UCF, who conducted early, innovative work on augmented reality.

As Director of the new UCF School of Modeling, Simulation and Training, and the Institute for Simulation and Training, Dr. Randall Paul Shumaker leads one of the nation’s largest groups focused on modeling and simulation (M&S) research and education. In addition, he manages the first, largest and most diverse M&S graduate programs in the U.S., supporting 120 students in seven research tracks.

Before his work at IST, Shumaker was the Superintendent for Information Technology at the Naval Research Laboratory and spearheaded research on a wide range of computing, networking and communications disciplines with a staff of 300. His work there in human-computer interaction resulted in substantial gains for the virtual reality, training and simulation community including at least two patent disclosures each year, and a $56 million growth in sponsored research.

Early in his career with the Navy, Shumaker managed the exploratory development program for aircraft support and the technology program, where his research contributions included automatic test and automation in aircraft support systems programming languages, software development and adaptive control in computer-based systems. In addition to his abundant research contributions, Shumaker was also a dedicated educator over his career, teaching throughout the U.S. and Europe, and even while attending graduate school.

Michael Alan Tschanz, director of technology and analysis for Walt Disney World, leads a multidisciplined team with more than 100 members that develops detailed mathematical and physics models for transportation, ride and animatronic systems, customer software and network applications and robotics. This group, within Walt Disney World’s Design and Engineering, is also responsible for the development of optimization algorithms, servo controllers, interactive/immersive experiences, and material process solutions.

Tschanz, known as an innovative thought leader, promoter and practitioner of modeling and simulation technologies, uses M&S to achieve design efficiencies and quality for the modern industry automation and industrial world and the overall Internet of Things (IOT). Throughout his career, he leveraged his application and use of simulation in aerospace and defense industries to bring simulation to the industrial automation world.

He is a great promoter of emerging simulation technologies like digital twin and operational and information technologies used to address some of industrial automation’s most difficult challenges associated with predictive maintenance, reducing unplanned operational downtime, and reducing inventory and logistics costs while improving customer experience.

ABOUT NATIONAL CENTER FOR SIMULATION